Here at LENICURA, we have made it our mission to help people, who suffer from Hidradenitis Suppurativa / Acne inversa and acute skin abscesses, by developing an effective, non-invasive treatment method.

Every day, we see patients and learn more about how devastating and limiting chronic abscesses can be for the patient’s daily life, for not only themselves but their families, their work environments as well as their intimate environments. Permanent pain often limits mobility as well as it causes considerable psychological stress. Our daily motivation is to help patients suffering from hidradenitis suppurativa by providing them with a gentle treatment method. We are inspired when we see our patient’s condition improve – subsequently improving their overall quality of life.
lAight®-therapy

LENICURA was founded with the goal of providing a gentle and effective alternative treatment for a medical problem.

The name LENICURA speaks for itself: A gentle alternative for MORE QUALITY OF LIFE. 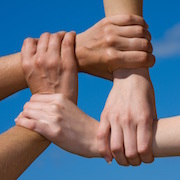 We aim to be a reliable partner in the fight against HS for both patient and doctor.

How it all began…

Like many innovations, LENICURA’s formation was motivated by a desire to help others, and an openness to developing new, effective methods, in the process. In 2011, Katharina Reinhard was running her own firm in the beauty industry and teaching at university. During a consultation with a client at her beauty firm, Ms. Reinhard got to know a patient suffering from hidradenitis suppurativa. The 44-year-old woman explained to Dr. Reinhard, how the disease had affected her, causing years of suffering, both physically and psychologically. After intensive research, Dr. Reinhard identified technologies used in instrument-based cosmetic procedures, which showed the potential to have a positive effect on stifling the progression of the disease. While the single components were well-researched with regard to other syndromes, the data basis for hidradenitis suppurativa was very limited – and only investigated in a few cases.
Dr. Reinhard convinced particle physicist Dr. Andreas Hafner from the University of Mainz, as well as human biologist Prof. Dr. rer. biol. hum. Stefan Zirn to participate in the research project. The duo’s in-depth knowledge about electromagnetic waves and medical engineering lead to the development of the lAight®-therapy and a specially designed apparatus for the treatments. A first documented test series confirmed a significant reduction of the symptoms of HS as a direct result of the lAight®-therapy. As positive results and feedback from patients began to rise, it became inevitable:

“All patients with hidradenitis suppurativa needed access to this effective and gentle form of treatment.”

Yet, the lAight®-therapy was not designed to be just an effective long-term treatment to reduce the symptoms of HS. Discussions with people suffering from HS had shown that because of the systemic and chronic nature of the illness, an effective interdisciplinary outpatient care system was also needed. To design and implement an extensive care-concept for patients and treating physicians, Arend Poppner joined the company in 2012. LENICURA was born.
The requirement for the approval of lAight® was a certified Quality Management System (LENICURA certified EN ISO 13485:2012+AC:2012 in May 2016) as well as clinical evidence supporting the effectiveness of lAight®, as a treatment. The clinical trial for the lAight®-therapy was conducted under the supervision of Univ.-Prof. Dr. med. Esther von Stebut-Borschitz, at the time senior physician in the dermatology department of the University Clinic Mainz, since October 2017 director of the clinic and policlinic of dermatology and venerology at the University Medical Center in Cologne. Because of its proximity and well-established expertise in inflammatory dermatosis, the University Clinic Mainz was a perfect partner for a research collaboration. The NICE-trial (Non-Invasive Combination therapy in acnE inversa) included patients diagnosed with all Hurley stages of the disease (all degrees of severity).
First results were presented at the European Dermatology and Venereology Congress (EADV) in Vienna in September 2016, in April 2017 at the DDG conference in Berlin, and at the SHSA 2017 in Detroit, USA.

If you are under 16 and wish to give consent to optional services, you must ask your legal guardians for permission. We use cookies and other technologies on our website. Some of them are essential, while others help us to improve this website and your experience. Personal data may be processed (e.g. IP addresses), for example for personalized ads and content or ad and content measurement. You can find more information about the use of your data in our privacy policy. You can revoke or adjust your selection at any time under Settings. Here you will find an overview of all cookies used. You can give your consent to whole categories or display further information and select certain cookies.